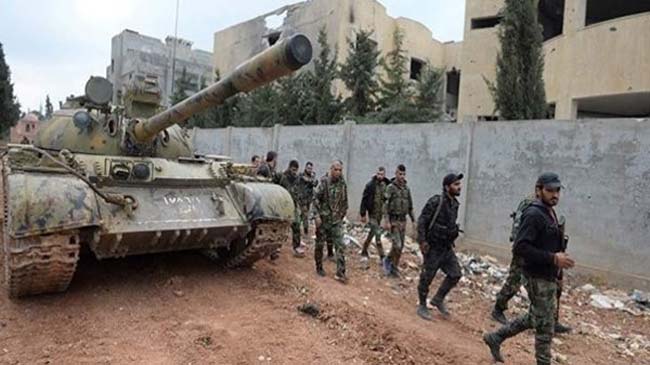 The Damascus Army backed by the Syrian and Russian air force warded off several attacks launched by Tahrir al-Sham al-Hay’at (the Levant Liberation Board or the Al-Nusra Front) in several regions to regain the regions they have already lost in Northern Hama, killing more than 130 terrorists.

“The Syrian Army in an ambush operation warded off a massive attack by Tahrir al-Sham terrorists from the town of al-Jamleh in Northern Hama, killing at least 30 terrorists and destroying a bomb-laden vehicle of Turkistan party,” the Arabic-language website of the Russian Sputnik news agency quoted a military source as saying.

The source pointed to the continuation of clashes between the Syrian Army and terrorists in al-Hamamiat-Karnaz axis in Northern Hama, and said the Syrian Army troops have killed over 100 terrorists in that axis and reinforced all their military positions there by restoring security to the surrounding areas of both towns.

The clashes also continued for the third day in battlefronts of Tal al-Melh and al-Jobin.

Meantime, the Russian and Syrian warplanes pounded the military positions and movements of terrorists in Khan Sheikhoun, al-Latameneh, Kafar Zita, al-Zuka, al-Arbaeen, Kafar Nubl, Tarmeleh and Hass in Southern Idlib and Northern Hama, destroying a large number of their military vehicles and hardware.

The Arabic-language service of Russia Today also reported that 17 military and armored vehicles of the terrorists were destroyed and several foreign terrorists were killed during fending off of an attack by terrorists on Karnaz town.

In a relevant development on Wednesday, it was announced that the Syrian Army had seized full control of 23 villages and towns from the terrorists since the beginning of its military operations in Hama province.

The Syrian Army’s massive military operations started in Hama and Idlib provinces after the terrorists violated the Sochi Agreement on April 26 and the government forces have spread their rule to Southern Idlib.

A sum of 18 towns and villages have been liberated in Northern and Western parts Hama province and the Syrian Army has also imposed full control over five other regions in Southern Idlib, the pro-militant Anab Baladi news website reported.