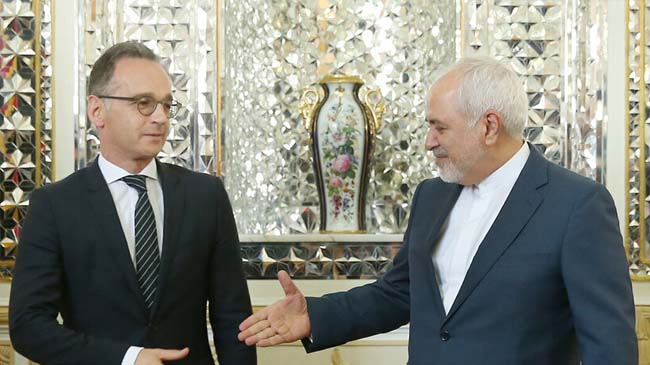 Iranian Foreign Minister Mohammad Javad Zarif said on Monday that anyone who starts a war against Iran will not be the one who ends it.

During a joint press conference with German Foreign Minister Heiko Maas in Tehran, Zarif said that Iran has not initiated and will not initiate a war.

He noted that no one can take an action against the Iranian people without receiving a firm response.

Zarif also said that the “economic war” against Iran should be stopped as the only way to reduce tension in the region.

“The only way to reduce tension is stopping the economic war. One cannot expect that those who have launched economic war and those who support it can be safe when there is an economic war against the Iranian ordinary people,” he said.

Zarif added, “This war is very dangerous for the region and the world. The United States’ actions after quitting the JCPOA [the 2015 nuclear deal] have targeted the Iranian people who were supposed to enjoy the benefits of this deal more than anyone else.”

He noted that Iran has remained committed to its obligations under the Joint Comprehensive Plan of Action which has been confirmed by the International Atomic Energy Agency for 15 times.

Iran is committed to its obligations and defends the people’s rights, he said.

Zarif told ABC News in an interview published on June 2 that Iran will not be intimidated by President Trump’s “art of the deal pressure” by using economic sanctions to push Iran to negotiate a new nuclear deal.

He said that “there will be consequences” if the U.S. keeps up its economic pressure campaign against Iran’s people.

Zarif labeled the new U.S. sanctions as “economic terrorism” that “targets ordinary Iranian people” because even though food and medicine are exempted from the sanctions, the financial transactions associated with them are not.

‘Iran’s actions are within framework of JCPOA’

Zarif also said that Iran’s actions by suspending some aspects of its commitments are within the framework of the JCPOA.

“We are ready to stop these actions based on the practical actions by the JCPOA partners,” he said.

He said that Iran cooperates with Germany and other remaining parties to the JCPOA in efforts to salvage the deal.

On May 8, Iran announced a partial withdrawal from some aspects of the pact, saying that the country would no longer adhere to some of the limits on its nuclear activities. It also threatened to step up uranium enrichment if an agreement is not made within 60 days to shield it from the sanctions’ effects.

Commenting on calls on Iran to sit down for direct talks with the U.S., he said, “They should first show us that negotiations with the U.S. will have a benefit and then ask for talks.”

Zarif also rejected U.S. claims that it was destabilizing the region.

“Who is causing instability in this region? Did we give Saddam Hussain weapons? Did we back al-Qaeda? Did we imprison the Lebanese prime minister?” he asked.

“Is it us who are bombing civilians in Yemen every day? Did we support Daesh and al-Nusra or were they American weapons that Saudi Arabia gave them?” he added.

Maas said that Germany supports preserving the JCPOA and recognizes Iran’s right to enjoy benefits of the deal.